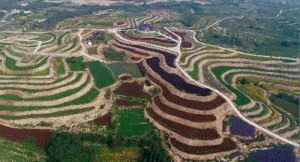 Neiqiu County, located in the central part of Taihang Mountains, has profound TCM culture and abundant wild herbal medicine resources within its territory. It is recognized as the birthplace of Bian Que, a well-known TCM physician during the Spring and Autumn period and the Warring States Period (407-310 BC). It has also been rated as a national TCM culture branding and education base. According to historical records, the Pengque Mountain in Neiqiu County was the territory, place of medical practice and burial for Bian Que. The Bian Que Temple in Neiqiu, which has the longest history and the largest scale of its kind in China, is listed as a national key cultural relic site under protection.

On the west side of the Bian Que Temple, the newly-built Bian Que TCM culture tourism and health care base “Yizu Hall” is of primitive simplicity and magnificence, echoing the largest Bian Que sacrifice temple group in the country. The “Yizu Hall” has an ancestral hall of TCM and the Bian Que TCM life hall. Among them, the ancestral hall of TCM, as a popular science platform for Bian Que’s TCM culture, is the only platform in China to sort out, study, display, promote and inherit the famous physician’s TCM culture.

Walking along the Taihang Mountains Expressway into the Bian Que TCM tourism and health care base is like walking into a picture scroll of Pengque Mountain. Surrounded by mountains and rivers, the base’s primitive and natural architectural style and spiritual artistic layout are integrated with nature. A stay in such a picturesque place makes people relaxed and happy, offering a taste of the simple and unsophisticated slow-paced life in the Taihang Mountains.